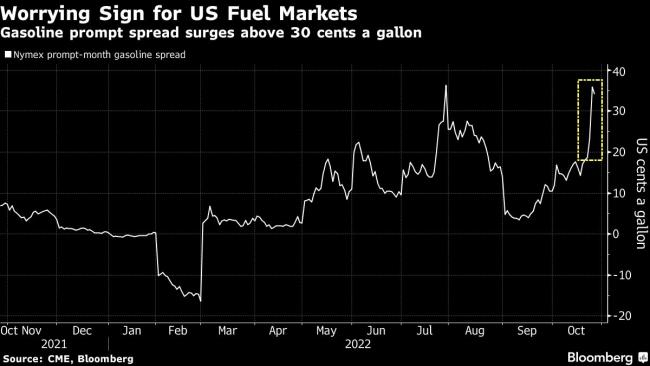 (Bloomberg) — The fuel crisis on America’s East Coast is deepening as terminals running low on diesel are now down on gasoline, too.

“Numerous” terminals are out of gasoline and ethanol over the past 72 hours due to various supply delays, according to distributor TAC Energy. Rallying futures show the reason “is more short squeeze caused by a variety of disruptions in supply, rather than an expectation of strong gasoline demand,” TAC wrote in a note.

The prompt-month gasoline spread soared above 30c/gallon Tuesday, a worrying repeat the market structure that precipitated this diesel shortage on the East Coast. Prompt deliveries are much more valuable than long-term ones, which encourages suppliers to sell immediately and not build inventory.

Read the QuickTake: What ‘Backwardation’ has to do with the US diesel squeeze

According to data from Energy Information Administration, gasoline stockpiles along the East Coast have fallen to their lowest seasonal level since 2007. The US region is dependent on Europe for gasoline imports during difficult times. As Europe struggles with its own energy crisis, Europe hasn’t been sending as much lately.

The East Coast has been suffering from severe shortages at a sensitive time. Voting began in midterm elections, where fuel costs, a major driver for historic inflation, are a top concern for many who will decide if Democrats will retain control of Congress.